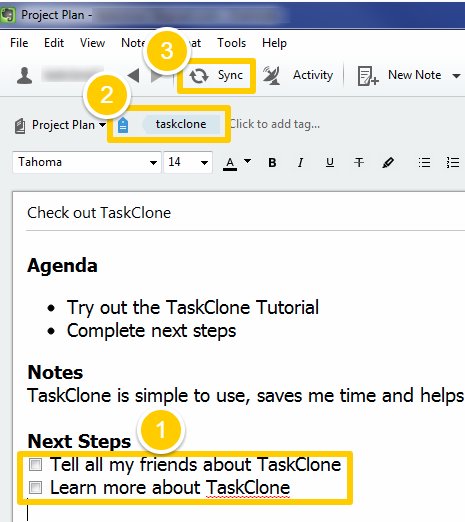 When you sync Evernote > TaskClone is notified of the tasks, extracts them and sends them to your task app in less than 1 minute.  However, your task app is responsible for converting them into tasks which can vary from 0-5 minutes.

When TaskClone is finished > it removes the trigger tag and adds Skip Codes to each task to prevent them from being cloned again.  You must sync again or wait for Evernote's auto-sync to see the changes TaskClone has made.

Important! Do not edit the note again until you see the trigger tag is removed and Skip Codes added next to each task.  You can manually sync after 30 seconds if needed.  Also, TaskClone will only process the same note once every 2 minutes.

Note: For best results, do not put tasks on first line of text as some Evernote apps use this line to create the note title and TaskClone will not recognize it as a task.